Before becoming a hypnotherapist Glenn made a living as a musician playing in pubs, clubs and restaurants. Glenn has written many songs over the years. Some have been published and some have won prizes in major song writing competitions.

In his teens, as a punk rocker, Glenn played the bass in a band called The Vagrants who morphed into the Sugar Ray Five. In 1983 they won £10,000 in the BBC1 National Battle of the Bands competition. They were then signed to a major label, released a couple of singles and appeared on various TV shows. Alas, their all too brief taste of success came and went like Halley’s Comet.

Later on, Glenn and his ex-wife Alyson (a talented vocalist who was a member of The Anderson Sisters) began writing songs together. A few years later, they started performing as a duo called Wishful Thinking, playing cover songs in clubs, pubs, hotels and restaurants. Towards the end of the ‘90s, Glenn moved away from the covers circuit to focus on building Diviniti Publishing, which is the label for his hypnosis recordings.

Glenn's huge sales in the self-help world have given him a great platform to launch a new songwriting career. The songs Glenn now writes are inspired by many of the things that have influenced his self-help books and Apps such as Human Consciousness, Spirituality, Shamanism, Ayahuasca, Raising Consciousness, Krishna Consciousness, Peace, Love and Veganism.

Glenn's first new release is a song called The Wayfarer, featuring Dean Rhymes on lead vocals. This song tells the story of an inspirational lady called Peace Pilgrim who walked across America many times in the name of Peace. Following that in the Spring of 2017 will be a beautiful ballad called Fading Photograph. One Love!

Here's an interview with Glenn about his music on Radio Saltire: 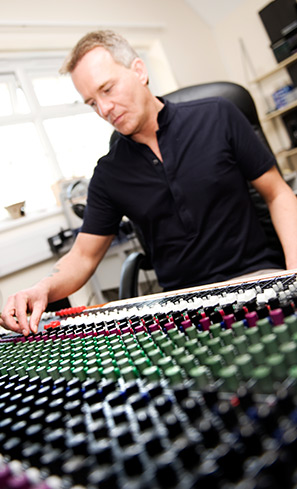 This went on to be released world-wide on an Amnesty International compilation CD. The Cork International song contest in 1997 saw them placed second with their original song “Teach our Children Well”. Both songs can be found on the Diviniti Demos album, Volume One.

International Song of the Year

“Transparency”, Glenn’s dance track came first in the dance category at the International Song of the Year competition in 2006. This song has since been signed up by Music in Head, an Italian dance music production company who have had many hits in Europe. Transparency has been re-mixed and four different versions are available on iTunes.